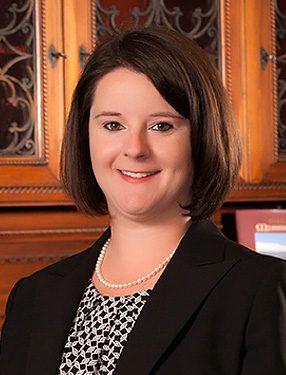 Lindsey enjoys litigation and being in the courtroom.  However, she believes that the best resolution to most cases is a mutual agreement reached by all parties.  Lindsey also represents many children as their guardian ad litem and believes strongly that children deserve to be protected and heard.

Licensed to practice law in the State of Missouri and Texas, Lindsey has appeared multiple times before the Western District Court of Appeals.

Lindsey received her undergraduate degree from the University of Houston Honors College in 2005 and her law degree in 2009 from Regent University in Virginia.

Lindsey’s passion for law started at an early age when her mother, a theatre director, began casting her in plays starting at age 4 with the Wizard of Oz as a “little munchkin.” Her theatrical interests eventually led to public speaking and debating. Lindsey’s hero is her father, Earle Powdrell, who is a rocket scientist for NASA, training astronauts and designing the Space Station. He ingrained in her the Apollo 13 mission motto: Failure is not an option.

Lindsey Bachman met her husband, Joshua, in law school and moved to St. Joseph, Mo., after their marriage in 2010. Lindsey and Joshua are proud members of the Snow Creek Patrol and also enjoy running half marathons. Lindsey is active in her church and serves on several community boards.