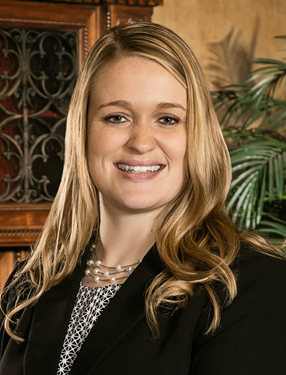 Lindsey is licensed to practice law in the states of Missouri and Kansas and the United State District Courts of the Eastern and Western Districts of Missouri.

While in law school Lindsey was a member of the UMKC Law Review and Urban Lawyer. She was also selected to be a law school emissary, and served as Co-President of that organization in 2015. Lindsey was a teaching assistant in the lawyering skills program for two years and was a member of the UMKC ABA Negotiation Team, competing at the national competition. Lindsey also competed in the American Bar Association Law School Tax Challenge where she received top written submission and third place in the oral competition.

Lindsey graduated valedictorian from East Buchanan High School in Gower, Missouri, where she was very active in the FFA, and went on to earn her American FFA Degree. She continues to enjoy spending time helping current FFA members, as her husband, Chase, is a high school agriculture education teacher and FFA advisor.

Lindsey and her family live in the St. Joseph area and are members of Central Christian Church. She enjoys spending time with her family, traveling, and volunteering at her daughter’s elementary school.